As I have mentioned before, Nokia is one of the few handset manufacturers to get it (See my post from 2/07 on this).  Nokia understands that hardware margins are eroding and like in many technology businesses the value is in the software and monthly service revenue.  In addition, as time goes by, more and more people will be using their phones and data services to get information and communicate with friends.  Therefore it is no surprise that Nokia announced yesterday that it wants to be more like an Internet company and less like a manufacturing company.

Our new structure is helping  Nokia to be more integrated as we focus more attention on developing new businesses around Internet services. Over time, it will allow us to be faster and more agile in bringing out new products and services, in serving our operator customers better, and in meeting our customers’ needs in different parts of the world.

The other piece that Nokia gets is that if they don’t start offering services on their devices, Google, Microsoft, and Yahoo will.  The delicate dance that Nokia is playing is how to fend off the traditional Internet guys while also adding value to its carrier partners.  Despite the fact that Nokia is one of the few companies that sells a significant number of phones direct to the consumer, carriers still matter.  To that end, it will be interesting to see how VOIP plays into this delicate balance.  For more on this, take a look at Michael Robertson’s latest blog post (full disclosure-Dawntreader is an investor in GIzmo5 and I am on the board) on the world’s smallest dual mode wifi phone. 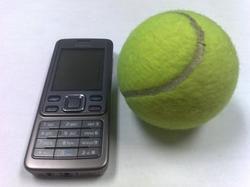 "This is not Nokia’s first wifi phone, but it is significant for several reasons:

From my perspective, what is great is that the price point is falling quickly for dual-mode handsets, the battery usage/life is getting better, and manufacturers like Nokia are willing to offer innovative services on them through partners like Gizmo5.  2008 will surely shape up to be an interesting year in the wireless industry.

@albn 💯 need to find the true believers at every round.

Lots of folks say they want to preempt your round but not many will actually do it. How do u know who will actually… t.co/pDTCnH7KCm

🚨📣 We're hiring a Design Engineer @liveblocks. Do you like making interactive microsites with animations? Do you e… t.co/p6xgzygiUS