There is a ton of hype on the wireless front especially with the announcement of Android, the Google operating system for mobile phones.  I too am quite excited about the prospects of having applications that are written once on the Google OS that can be ported to any other phone on any other network that also supports the Google OS.  If any of you have developed apps in the wireless world, that is not exactly how it works as even apps built on the Java Micro Edition Platform need to be tweaked for different devices and different networks.  The idea of having phones and web-based apps that are truly easy to use and truly cross platform is a big one but the proof will be in the details.  The impact will be dependent on how many devices on how many networks that are truly open will be in the hands of the consumer.  In the short term, what Android really does is put pressure on the other wireless players like Nokia to respond.  All of this reminds me of an email that Michael Robertson (CEO of portfolio company Sipphone/Gizmo Project) just sent me. 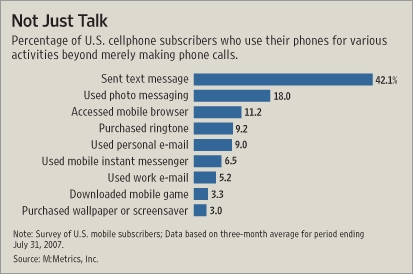 It represents the reality and the opportunity for wireless applications – the majority of people today only send SMS messages and a relative minority use their phones for mobile browsing, email, and other applications. Will easier to use phones, faster networks, and better applications change that?  I am sure that it will as users like my wife and her friends who are not the most technically savvy are starting to get iPhones and using it to post pictures to websites and view Youtube videos on the run. However, in the meantime, I would also remember that the lowest common denominator is still SMS so don’t forget that user base when building mobile apps like community based functions, social networking, games, advertising, etc. because that crowd is still dominating the here and now.

One comment on “Wireless and the lowest common denominator”

This time sucks but good things can come out of this! I have so many more stories like this - @GoToMeeting survived… t.co/MdZQzE3mO8